Hopeland Featured at the United Nations on World Children’s Day

By Andrew StoneNovember 22, 2019Events
No Comments

World Children’s Day marks the date in 1989 that the United Nations adopted the Convention on the Rights of the Child and this year’s celebration of the 30th anniversary was an incredible event with Hopeland featured prominently. 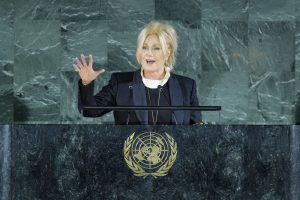 Hopeland was delighted to be a part of the celebrations this year which saw UNICEF Goodwill Ambassadors David Beckham and Millie Bobby Brown speak about the importance of Childs’ Rights and Hopeland’s inspiring Co-Founder Deborra-lee Furness introduce our friend Keala Settle who sang her anthem ‘This Is Me’.

As part of the event Hopeland unveiled a sculpture that is standing in the lobby of the UN General Assembly Hall – where tens of thousands of people can see it every day as they come to work at or visit the United Nations Headquarters in New York.

The sculpture of Hopeland’s ‘Child With Kite’ logo was timed to coincide with the 30th anniversary of the Convention on the Rights of the Child because the images of families on the eight kites recognizes the many families that can provide a safe, loving home to vulnerable children around the world.

There are at least 25 million children globally separ 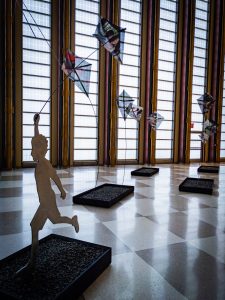 ated from their families but many millions more who with the right support can care for these children. Hopeland works to support these children and mobilize the world’s families to take action.

The installation was created by local artist Jon Mulhern and the photographs were kindly provided by the renowned fashion photographer, Nigel Barker. Special thanks go to our friends at UNICEF and the countless families that support the work of Hopeland and children around the world.

ers Deborra-lee Furness and Nicholas Evans also took the opportunity to catch-up with UNICEF’s Executive Director, Henrietta Fore, about Hopeland’s work with our friends at UNICEF.

It was an honor to be involved in such an important day which highlights the inspiration we can all take from the world’s children and how vital it is that we listen to them when making decisions that will impact children the most.